The Food and Agriculture Organization of the United Nations (FAO) reported this week that Honduras must take urgent measures to address the severe food crisis that affects 3.3 million people; 35 percent of the country’s total population.

Hunger, malnutrition, food insecurity and drought are some of the factors driving the dramatic exodus of hundreds of thousands of Hondurans fleeing the country as best they can . According to the FAO statement, “the number of people who are forced to leave their homes in search of a better future is increasing.”

But the majority of migrants whose goal is to reach the United States are not necessarily seduced by the possibility of realizing their own American dream, but rather expelled from their country of origin where the violence of misery advances on the most vulnerable.

Immersed in the tragedy of hunger, the Honduran people await the effective action of a State that, until a few months ago, did nothing more than turn its back on a reality that today is being exposed in all its harshness

Hondurans know poverty. They face it every day due to the inaction of a State mired in foreign debt that binds it hand and foot. Nearly 63 percent of the population lives below the poverty line. And one in four children is stunted or chronically malnourished.

The pandemic meant a severe setback for Honduras in its intention to stop the high growth of hunger and child malnutrition. The cocktail of endemic misfortunes, added to the terrible management of the health crisis unleashed by Covid-19, has been disastrous for the Central American country. The loss of thousands of jobs, severe tropical storms, recurring droughts and the dubious administration of its former president, Juan Orlando Hernández (indicted for drug trafficking), have resulted in a phenomenal growth in inequalities and, linked to this , a violence that pits the poor against the poor.

Before the pandemic was declared, more than fourteen million people in Central America suffered from hunger, inequality, and lack of protection. Now the possibility of dying if they do not have urgent access to a sufficient and balanced diet is highly probable.

Xiomara Castro , recently elected president of the country, faces a historic challenge. Immersed in the tragedy of hunger, the Honduran people await the effective action of a State that, until a few months ago, did nothing more than turn its back on a reality that today is being exposed in all its harshness. 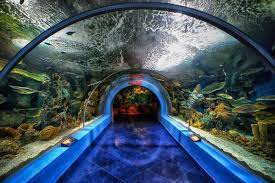 Fakieh Aquarium And The Dolphin Show In Jeddah